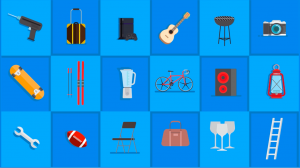 Like most great ideas, Yuzit’s birth was created out of necessity. I was working as a Cruise Director for various luxury cruise lines for nearly 20 years and I can tell you that nearly each time I had time off I was looking for things to USE or have ACCESS to but did not want to buy. That’s because I knew I was going back to ship life and could not take those items with me. Sure, over the years I ended up buying a few items but only to find that I had to put them in storage while I was gone. So not only did I pay for something that I rarely used, I then had to pay someone else to store it. How crazy is that? And so the sharing economy app was born.

In the Spring of 2016, I had to do some renovation work on one of my rental properties and finally realized that there was too much of a demand for Yuzit yet nothing really existed which satisfied this demand. For this project, I only needed to use some scaffolding, a ladder and some common tools like a drill and a basic set of wrenches. But I didn’t want to spend the $1000+ it would take to buy them. Now renting, while ok for some of the items, was not going to get me all of the tools I needed…and again, the price was too much! So I thought to myself…why do we all have to own the exact same things so many times over? After doing some research I found out that nearly 90 percent of the items we own end up being used about 10 percent of the time. Really? Then why do we ALL pay to own the same items that we ALL rarely use? Because that’s the way it’s been forever…and ever…and ever. Well, now it’s all about to change…and Yuzit will allow everyone the ability to have access to all of the items they need without having to buy them. It will also allow anyone to make money lending the items they own yet rarely use. All of us can borrow them for a short period of time and save money in the process. You can even “try it before you buy it.” I realized that never again will I wonder if I will like something after I buy it when I can Yuzit first.

So…now you understand why we all need to Yuzit. It’s about connecting people locally through a sharing economy, in their own communities, and giving all of us the ability to have access to the things we need. Helping people produce less waste but using the stuff we all have already but simply need to be connected to. It’s safe, fun, and easy to use….and makes life easier. So choose access over ownership and invest in the experience…not the goods.